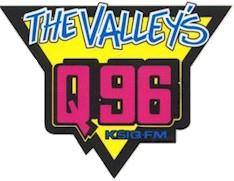 “From Baja to the North Shore, from Pine Valley to Arizona’s Door”. Q96 was one of the best-sounding CHRs I’ve ever heard, and it’s more impressive upon realizing that the area it served (the Imperial Valley in far Southern California) was/is not even rated by Arbitron.  It offered great music, air talent, and production values. This aircheck was recorded sometime in 2000 (presumably in the Summer or Fall, judging by the mention of the 100+ degree temperatures).  Please note that this montage represents two separate segments (one at the end of morning drive, and the other in late afternoon drive), so certain songs are heard twice.

Sadly, in an effort to garner more advertising dollars, the owners of Q96 made an attempt to move the station’s signal closer to the San Diego market. This was an ill-fated decision; the station was sold to the Educational Media Foundation and switched to the “Air 1” Christian-rock leaning format at the end of 2013.