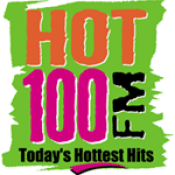 – Contributor Robyn Watts provided the information shown below, following the publication of a different Hot 93 aircheck on this site.

– The logo shown above is representative of the station during its “Hot 100” days – the timeline is detailed below. A logo specific to “Hot 93” was not available at the time of publication.

Hot 93 was a CHR that Cumulus had signed on the air back in late 1998 and was actually 2 stations simulcasting each other (93.7 WXJY from Georgetown, SC and 93.9 WJXY is from Conway, SC). Both signals together covered the majority of the market adequately, but missed much of the north end of the Grand Strand. Around 2001, sister Classic Rock outlet WSEA (100.3) flipped to a simulcast of Hot 93, filling in the gaps in signal coverage and allowed the 93.9 signal to flip to Sports.

Despite the various tweaks in both signal and programming, Hot wasn’t able to beat heritage CHR Mix 97.7 (WXXM) in the ratings and eventually flipped to Hip-Hop/Urban as “Power 100″. Over Independence Day weekend 2010, Power 100 dropped its format for a second chance at CHR as “i-100″.

On February 1, 2013, both stations flipped once again to a Southern Rock/Country hybrid format known as “The Outlaw”.